Getting to the point with woodcock research 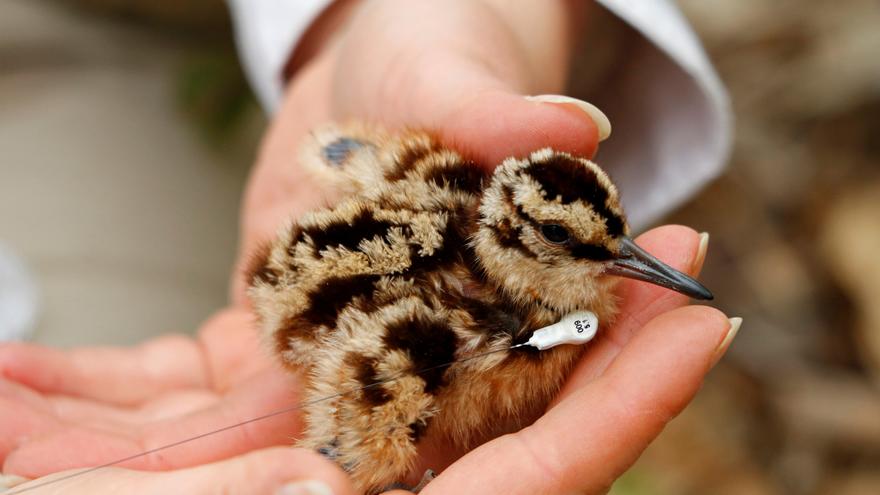 The quiet, brown speckled woodcock is difficult for scientists to find in the forest for research. Enter the pointing dog.

Superbly camouflaged to match the browns of the forest leaf litter, the female woodcock stubbornly sits on her ground nest.

The young chicks also match the forest floor. So finding American woodcocks for research is next to impossible. For a human. But not for a dog.

And that’s how Peterson, an avid bird hunter and part time field technician, is helping to conduct NRRI research, led by NRRI wildlife ecologist Alexis Grinde, to inform forest harvesting practices. Her Gordon setter, Riley, nose to the ground, covers seven miles of forest for one mile of Peterson’s in search of a mother woodcock.

The woodcock is one of three bird species NRRI is studying to understand how the birds use the resources of a young forest versus a mature forest from birth to young adult. The golden-winged warbler, veery and American woodcock are species experiencing population declines throughout their breeding ranges. But there’s a large, young forest plot near mature forests north of Warba, Minn., that attracts these birds.

What’s not known is how the woodcock use the forests as they grow and how different forest characteristics impact survival. 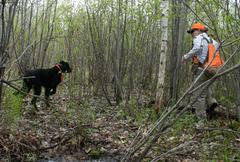 So while hidden from view, the woodcock can’t hide its scent from Riley. He zig zags across the forest while Peterson tracks his movement with GPS. When Riley picks up the scent, he stops and points, frozen in movement until Peterson gets closer and asks Riley to flush out the mama bird so she can approach the nest.

“Think about it. Without Riley, I’d have to literally walk every inch of the forest to find their nests,” she said.

Once the baby birds are found, Peterson loops a thin, degradable “necklace” around the chick with an attached transmitter. The necklace is designed to fall off by fall migration time. Over the next few years of the study, the data will show how long the young stay near their nest, how they seek protection from predators and if mature forests are part of their survival strategy. As of the end of May, they had six chicks carrying transmitters.

“What makes this research unique is we are following three species of juvenile birds that depend on young forests for breeding in a distinct study plot,” Grinde explained. “We are tracking the movements of juveniles as they grow so we can identify forest characteristics that increase survival and ultimately help promote the conservation of these important species.”

This project is funded by the Environment and Natural Resources Trust Fund as recommended by the Legislative-Citizen Commission on Minnesota Resources. It is a continuation of NRRI’s long-term study in a forest harvest site supported by UPM Blandin and National Council for Air and Stream Improvement, Inc.

In 1997, Debbie Peterson was a recent college graduate from Northern Michigan University looking to put her biology studies to work. She ended up in the NRRI Bug Lab counting and sorting aquatic macroinvertebrates, which quickly led to joining the avian research team. Jerry Niemi was director of NRRI’s Center for Water and the Environment at the time and lead ornithologist. 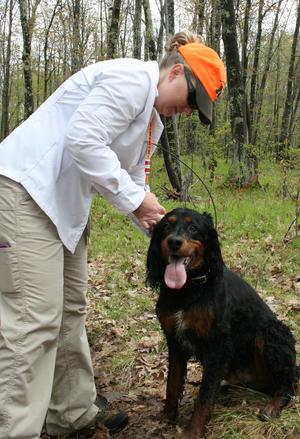 “Jerry encouraged me to do a graduate assistantship and get my master’s degree,” said Peterson. “I’m a people person, so I got my degree from UMD in environmental education. My connection with NRRI was huge for defining my career.”

Now a full-time high school teacher, Peterson has continued doing summer field work for NRRI all those years, as well as for other agencies. The combination works well for her. Doing research keeps her scientist skills sharp and spending time in the woods during the summer is good therapy.

“After a busy school year, I’m ready to be in the woods with my dog, listening to birds,” she said.