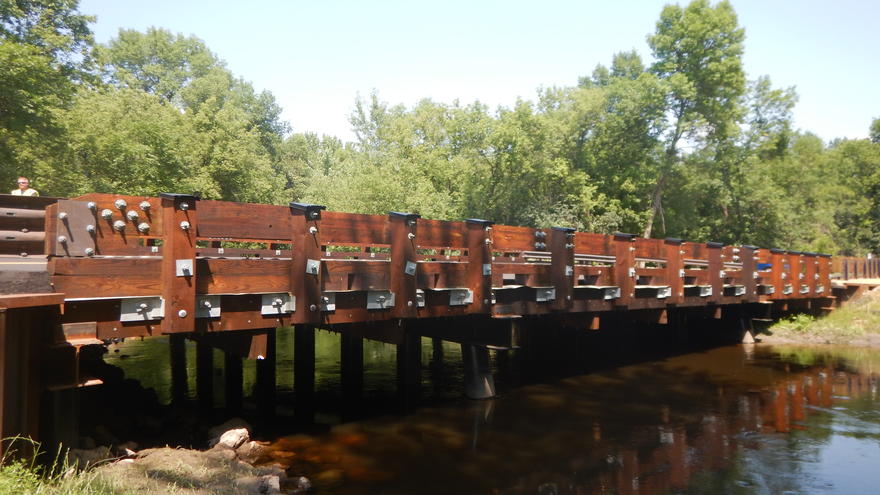 Research shows bridge builders that building with wood can save time and money while sequestering carbon.

“There’s a huge demand now for sustainably sourced construction and I think timber bridges can play a role.” - Brian Brashaw

Everyone has to believe in something. And Brian Brashaw believes in wood. His entire career has circled around research to promote the use of wood in a variety of products. At NRRI from 1998 to 2016, Brashaw led the Wood Materials and Manufacturing Program which he left to join the USDA Forest Service. He now serves as Program Manager for their Forest Products Laboratory and acting Assistant Director for Wood Innovations.

While at NRRI, he and his team began a series of research endeavors to calculate the true value and efficiency in using wood for bridges. In August, the final report in a series of four, “Development of Cost-Competitive Timber Bridge Designs for Long-Term Performance,” was published by the Minnesota Department of Transportation.

During the course of the research – 2000 through 2019 – Minnesota counties built 4,335 concrete-based bridges, 26 steel-based bridges and just 26 timber bridges. Brashaw and co-investigator Jim Wacker at the Forest Service’s Forest Products Laboratory set a goal to show county bridge engineers that they could save time and money building timber bridges, or even by combining timber with steel beams. And as climate change awareness grows in the bridge community, Brashaw sees a growing interest in carbon sequestration, in which timber bridges can play a role. 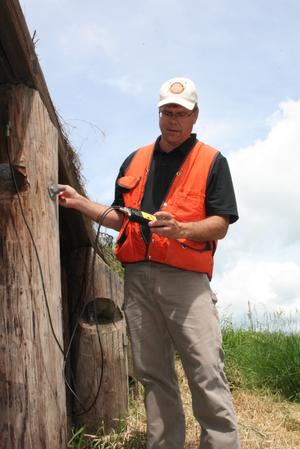 Working with the Minnesota Department of Transportation Local Road Research Board, the researchers identified design needs, interviewed Minnesota manufacturers of timber bridge elements and surveyed county engineers about their perceptions of timber bridges. Then they participated in the design and monitored construction of two demonstration bridges – one in St. Louis County and one in Hennepin County – to meticulously track design, bidding, cost and construction of the new bridges. They also integrated innovative moisture protection measures in the designs for enhanced durability.

“This is a very environmental approach to construction – low carbon footprint, low energy and carbon storage – and they go up so much faster,” said Brashaw. “There’s a huge demand now for sustainably sourced construction and I think timber bridges can play a role.”

NRRI Scientist Matt Aro conducted Life Cycle Assessments on the two bridge projects. These assessments were done on a “cradle-to-gate” basis – from growing the trees, harvesting, milling, hauling the materials to the site and final product. For the St. Louis County bridge, all the steel components were also assessed, from mining the ore to construction of the bridge. Disposal of the bridge at the end of its useful life was not part of the calculations, nor were comparisons done to other construction methods.

Aro studied six impact categories: water use, climate change, cumulative energy demand, resources, ecosystems and human health. His research showed that use of timber has the least impact over the six categories.

“My big take-away is that, if you’re designing a bridge, increasing the use of timber can reduce life cycle impacts in many categories,” said Aro.

These projects showed that the main advantage of a timber bridge is the speed of superstructure construction with the other costs similar to that of other materials.

“It’s clear that timber superstructures can be installed over shorter construction periods, as compared to using other bridge materials,” said Wacker. “The many benefits for timber structures might be surprising to some.”

He cites timber’s strength, light weight and energy-absorbing properties. Of keen importance in colder climates, timber bridges can be constructed in all weather conditions and wood is not damaged by continuous freeze/thaw conditions, while also holding up to de-icing road salts. Timber bridge construction doesn’t require specialized equipment and can be constructed without highly skilled labor.

“We began this project with the hypothesis that modern wooden bridges could compete with either concrete or steel bridges as a good method for bridge replacement," said Fosnacht. "The results show that the wooden bridge is similar in cost, but can be built in much less time than the two other techniques, saving both money and energy. With proper design and installation, they can last as long as the competing technologies and store carbon at the same time."

This research was funded by MnDOT’s Local Road Research Board with support from MnDOT’s Bridge Office and input from a broad Technical Advisory Panel.