NRRI gets onboard to blast invasives on ships 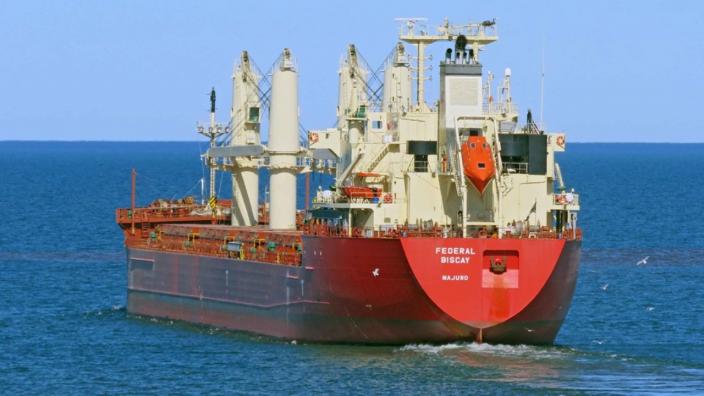 Research to stem the transport of aquatic invasive species led NRRI researchers on globetrotting adventures in 2017.

Vendors use the information to improve their technologies, and some went off the market completely.

Chasing a 656-foot red ship to ports around the world might sound like fun – and it was. But the globetrotting was part of a research effort to stop the spread of aquatic invasive species as part of the Great Waters Research Collaborative.

NRRI Senior Research Associate Euan Reavie and his team of scientists delivered their final report on an effort they began years ago to test ballast treatment technologies. How well does the equipment kill off critters we don’t want infesting our Great Lakes?

After a decade of lab research, this final step was to test the technology on a working commercial bulk carrier, the MV Federal Biscay. They analyzed the ballast water at uptake ports from Ireland to Costa Rica and discharge ports from New Orleans to Hamilton, Ontario. Nearly 20 ports with a variety of water types (fresh, marine and brackish) were visited during the year-long effort. Each port stop could last from a few days to a couple of weeks.

“These are commercial operations that weren’t concerned about our schedules,” Reavie said with a laugh. “The schedules would change because of bad weather or a new order to pick up. They were hauling limestone or taconite, all kinds of things.”

The researchers were testing one specific, promising technology called BallastAce, a filtration and chemical injection treatment technology, made by JFE Engineering Corporation. At the intake port stops, the researchers needed a certain number of organisms present to do a valid test. The tests also had to pass five times consecutively or it wasn’t valid. The final report is now in the hands of the vendor and policy makers so they can deploy the technology on ships with confidence.

“The engineers who build equipment like this have good intentions,” Reavie explained. “But they don’t necessarily grasp the complex biology or water around the world. A vendor may have done preliminary testing in Europe, and then come to Lake Superior and get completely different results.”

Through the years, NRRI’s research and work by the Great Waters Research Collaborative has had an impact. Vendors use the information to improve their technologies, and some went off the market completely.

Now NRRI is engaged in a project specific to the Great Lakes, testing ballast discharge for invasive species that are known to wreak havoc on native biology.
“We know invasives are getting to Duluth because we see them; they’re here. But we’ve never adequately quantified it,” said Reavie. “What exactly is coming in ballast water? At what rate? How many? That’s what we’re figuring out now.”