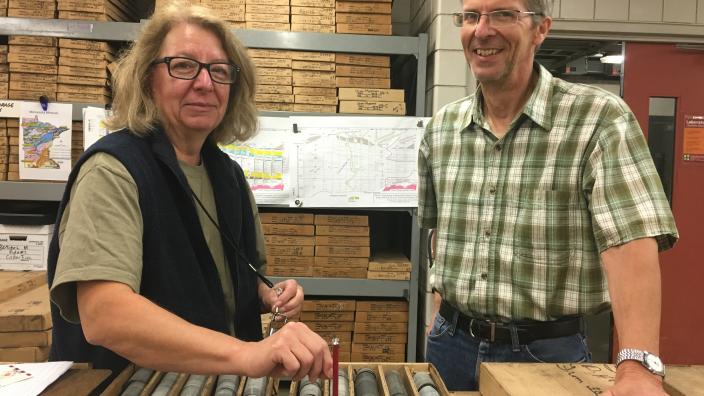 “NRRI’s final resource evaluations were instrumental in identifying the final route and the bridge over the Rochleau pit that we see today.”

“In order to mine the ore, you must mine where Mother Nature put it,” said Senator David Tomassoni at the dedication ceremony of the new U.S. Highway 53 Bridge near Virginia in September.

Likewise with studying the ore; you must go where the ore is. Which is why NRRI’s geologists spent two years living in campers and cabins with their three dogs. But being onsite allowed them to finish their research for that bridge project on time and under budget.

In July 2013, NRRI’s John Heine and Marsha Patelke moved to their temporary shelters to help the Minnesota Department of Transportation with a huge challenge – rerouting U.S. Highway 53 to make way for expanded mining near Virginia. They wanted to be able to gather data as efficiently as possible to inform the project’s preliminary planning. And the clock was ticking. MnDOT had to get the re-route completed by November 2017.

They beat the deadline.

But those first two years of NRRI research, 2013 to 2015, laid the foundation – almost literally – for three and a half miles of new road and a massive, 204-foot-high, 1,100-foot-long bridge. NRRI’s geologists were able to help MnDOT determine the best re-route plan for the project by studying the rocks on which it would be built.

“We did the preliminary work that went to the engineering company so they knew what the foundation would be,” explained NRRI Geologist Marsha Patelke. “Is it bedrock? Or fill from previous mining activity?”

Even more importantly, NRRI’s analysis of the rock showed the value of the ore under the new road and bridge. This allowed MnDOT to purchase that ore value from Cliffs Natural Resources and the Minnesota Department of Natural Resources. They would never have to move the road again.

The original roadway was built in 1960 with an easement from iron mining interests. At the time, MnDOT agreed to move the road with three years notice if the mining company needed to get to the ore underneath. When that time came, the agency came up with three options to reroute the highway, and there was a lot to know about each scenario.

Patelke and Heine pulled over 35,000 feet of rock core samples out of the ground and brought it straight to NRRI’s minerals lab in Coleraine. Staff there ran taconite industry-standard tests to assess the resource quality and NRRI Geo-engineer Larry Zanko used the data to model what was ore, what was waste, and then estimated how much would be made inaccessible by each reroute option.

“I generated a resource model that provided an objective third party estimate for what tonnage MnDOT would have to pay for,” said Zanko. “And our numbers were in close agreement with leaseholder tonnage estimates, so that made it easier to arrive at a consensus.”

As the project moved forward, more questions surfaced and more data was needed. The team was also asked to evaluate the resources for potential gold reserves. In the end, MnDOT built Minnesota’s tallest bridge connecting Virginia and Eveleth for decades to come.

“NRRI’s final resource evaluations were instrumental in identifying the final route and the bridge over the Rochleau pit that we see today,” said Jason Richter, MnDOT Chief Geologist. “Their great work allowed us to move ahead with the right-of-way negotiations and engineering to ultimately get this project done ahead of schedule. It’s something we can all be proud of.”