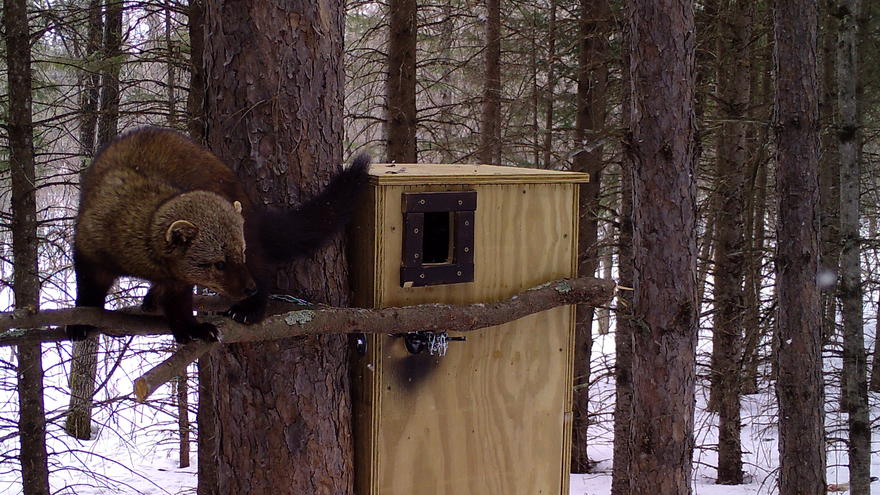 Our fisher population isn’t doing as poorly as they are in other places, but we don’t want it to get to that point.

Packing out a 52 pound wooden box, deep into the woods – and this will happen 100 times when all’s said and done – makes NRRI Biologist Michael Joyce feel more like a pack mule than a scientist.

The insulated and specially designed boxes are for forest fishers – cute, brown, mammals in the weasel family – to give the mama fishers a safe place to den and raise their young. The goal is to increase the fishers declining populations in northern Minnesota, in the same way nesting boxes for wood ducks and blue birds helped those species.

“I’m either going to get good and strong through this, or I’m just beating up my body,” Joyce laughed. “But I think the data we get will make it worth the effort.” 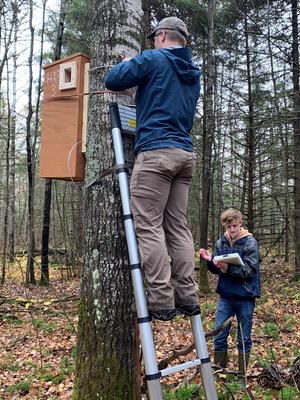 The artificial den boxes could make up for the lack of big, old cavity trees – 20 inches in diameter, on average, which are the fishers preferred habitat. Trees of that size are hard to come by in forests managed for timber sales or that have succumbed to other disturbances.

Over the past 20 years, the fisher population in Minnesota has declined by 50 percent. And after extensive surveying of more than 10,000 northern Minnesota trees, the researchers found less than 2 percent were large enough for fishers to use. Industries that depend on forests understand that when species are deemed threatened or endangered it increases the burden of regulatory and administrative restrictions on forest management plans.

Hiked out to sites through brush and swamp that are well away from roads, the boxes are hung high on the trees, trail cameras are affixed to watch the box opening and a branch is attached to the entryway.

This project will evaluate the success of the boxes and develop guidelines and construction plans for land and wildlife managers, as well as private land owners and other groups that want to improve fisher habitat. The box openings also have sticky tape on one side to collect hair samples that can later be used for genetic testing.

The pilot study, completed in May 2019, showed the new homes attract the attention of the neighbors. Trail cameras show barred owls, rodents, flying squirrels, raccoons and bears at the den boxes. “We’ve even seen red squirrels mating on the roof,” said NRRI Wildlife Biologist Michael Joyce. “But we know fishers are there and using them. We’ve got them on camera, too.”

Aside from being an iconic north woods mammal, healthy fisher populations indicate good habitat conditions for other critters that also rely on older forests. Landscapes with young, middle aged and older forests provide for a variety of species.

“Despite the recent decline, our fisher population isn’t doing as poorly as they are in other places, but we don’t want it to get to that point,” said Joyce. “Right now we are trying to learn as much as we can to reverse the trend and provide tools to maintain a healthy fisher population in Minnesota.”

The den boxes are just one part of a multi-pronged approach to understanding the fisher population decline. Researchers are also examining tree cavities that were previously used by fishers to understand how long it takes for a natural nesting site to form and how long they last in the forest. They are also collecting scats near the boxes to understand fisher diets, and they will examine interactions between fishers and other carnivores in the future to learn more about common predators of fishers.

The two-year Fisher Den Box Project is funded by the Environmental and Natural Resources Trust fund as recommended by the Legislative Citizens Commission for Minnesota Resources (LCCMR).