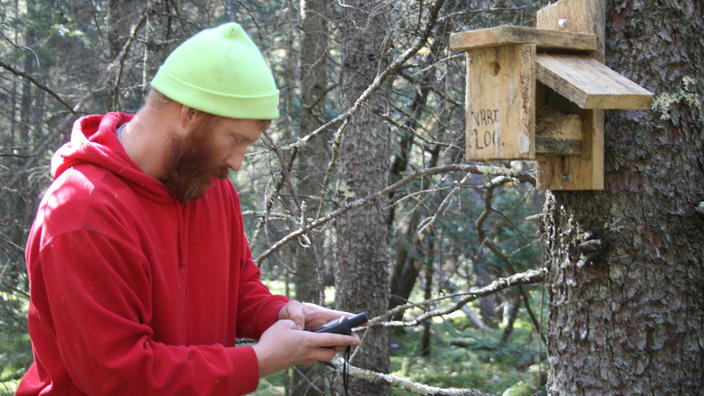 Researchers tromped through the soft mounds of green in the boreal forest to hang bird houses to learn more about an elusive species.

“This ecosystem is a large piece of our Minnesota landscape but there’s so little research done there.” Windmuller-Campione

Pulling up to the green and golden boreal bog northwest of Duluth, NRRI researchers were greeted by a gray jay and a boreal chickadee.

“People come here from all over to see those two bird species” said Alexis Grinde, NRRI wildlife ecologist. She’s co-leading a collaborative project to understand more about the boreal chickadee to inform forest management of peatlands. “You generally don’t see those species in your yard. These lowland conifer ecosystems are so unique with a unique diversity of not only birds, but also plants and insects.”

And that’s exactly why the Sax-Zim Bog Welcome Center recorded 4,316 visitors over the last three winter months, December to March. Bird enthusiasts flocked in from 41 states and five foreign countries, according to Bog Executive Director Sparky Stensaas. And given its remote location, it took some effort to get there.

On this October day, NRRI researchers were hanging some of the 500 nesting boxes that will pepper the Sax-Zim Bog and Big Bog north of Bemidji. Boreal chickadee has been identified as a Species of Greatest Conservation Need by the Minnesota Department of Natural Resources. The hope is that a half dozen or so boxes attract the bird as a place to lay eggs. The researchers can then capture and place tiny radio transmitters on them to learn more about how they use the forest. 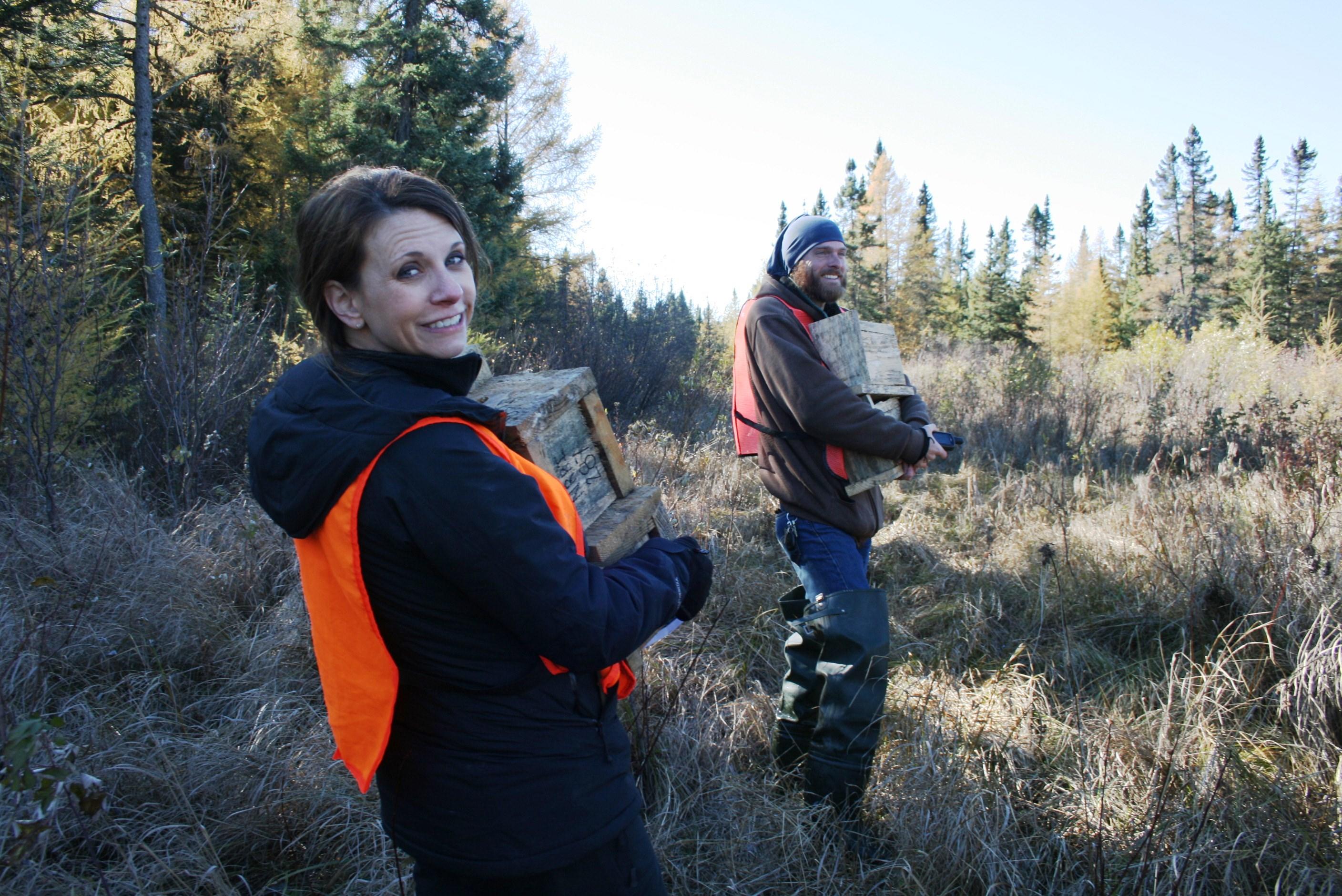 The concern is that a warming climate is changing the bog ecosystem, which is at its southern-most range in Minnesota. If so, is that impacting boreal chickadee populations? Exploding numbers of Eastern larch beetles are killing off thousands of acres of tamarack trees. Is that where the birds like to nest? Is the harvesting of older trees – the ones with naturally occurring cavities – impacting available nesting spots?

“We don’t know very much about these birds now, so anything we can learn will be really valuable,” said Grinde. “Studying the changes here and now will ultimately inform future management, as landscape changes continue to push north into Canada.”

The nesting boxes, filled with sawdust to mimic tree cavities carved out by woodpeckers, will make it easier for researchers to return next year to see if they’ve been inhabited by boreal chickadees or any other species.

“Potentially, if we learn more about the peatland ecosystems we can develop strategies for the long-term conservation of high quality habitats and mitigate the impacts of climate change on the birds,” Grinde added.

Understanding exactly how these slow-growing bog grow and regenerate after a harvest and how the water levels influence their productivity is another important part of this project. Marcella Windmuller-Campione, Forest Resources professor, and Rob Slesak with the Minnesota Forest Resources Council, are collaborating with Grinde to understand the peatland bog system as a whole.

“This is a rather unique set of studies,” said Windmuller-Campione. “This ecosystem is a large piece of our Minnesota landscape but there’s so little research done there.”

In order to better inform forest harvest practices, Windmuller-Campione will gather data on all the unique peatland vegetation – from the mosses and lichen to varying age classes of trees, young to old. How does this resource develop after a harvest? Do we need to change practices to better accommodate wildlife and the timber industry? Slesak will focus on peatland hydrology and how it changes over time, before and after timber harvests.

“Everyone loves the birds, and understanding how hydrology influences this unique habitat is essential to maintaining it in the future,” said Slesak.
The researchers hope to understand more about trade-offs for the timber industry and wildlife, as well as potential adaptation strategies.

This project is funded for four years by the Environment and Natural Resources Trust Fund (ENRTF) following recommendation from the Legislative Citizen Commission for Minnesota Resources (LCCMR).