The future of bats in Minnesota

"We need to balance the needs of society with the benefits we receive from the natural world.” - Ron Moen

A scan of recent news headlines portrays a foreboding future for bats.

And while there’s hope in new antifungal treatments, millions of North American bats have already died because of a fungus picked up while overwintering in caves. Or in the case of Northern Minnesota, in an old underground mine.

Knowing that bats have an amazing appetite for pesky insects, we hope their populations will recover, but there are a lot of unknowns.

So, what does the future hold for Minnesota bats?

NRRI Biologist Ron Moen has begun to work on answers to that question. Some new research he'd like to pursue will help us understand even more about these creatures of the night, and hopefully help their recovery.

"I think we’ll always have bats in Minnesota, but they will be at a lower density,” said Moen.

A graduate student working for Moen studied bats long before white-nose syndrome arrived in Minnesota. Then in 2015, Moen teamed up with Richard Baker, Minnesota Department of Natural Resources Endangered Species Coordinator. With funding from the Legislative Citizens Commission on Minnesota Resources, they began a large research project as the devastating fungal disease took hold.

The Soudan Underground Mine, now a state tourist attraction, is Minnesota’s largest bat hibernacula. White-nose syndrome was discovered in the mine in 2016, and since then many thousands of bats have died from the disease.

“The population decline is real,” Moen said, “but we also documented bat calls in the Soudan Mine using acoustic detectors in 2017 and 2018, after the fungus appeared, so some survived.”

Mines are an interesting part of bat biology, both in Minnesota and elsewhere.

“Two hundred years ago, we didn't have mines in northern Minnesota where bats could hibernate. They would have migrated south each winter,” he explained. “We created the habitat, bats found it, and their populations grew.”

But the story is complicated. Minnesota has seven bat species – four that hibernate in caves/mines and three that migrate south in the winter. The cave bats are susceptible to white-nose syndrome, while migrating bats face perils such as wind turbines on their travels.

So, if few bats survive in Northern Minnesota’s “caves” (i.e. mines) will the migrating bat species get more insects to feast on and thrive? 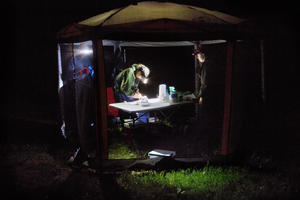 Archive Photo: NRRI Researcher Morgan Swingen bends over a table to apply radio tracking device to a bat during the large LCCMR-funded research effort that started in 2015.

Moen also wonders how bats use other human-made features to make their lives a bit easier.

Northern long-eared bats usually roost in older trees with cavities. But little brown bats also often roost in houses and buildings. Bats also travel and forage for insects on human-made trails and roads. In Moen’s first research project on bats back in 2009, research showed that bats are more abundant along linear features than in the interior of the forest.
Even knowing this, Moen was a little surprised in September 2019, when the acoustic detectors identified very high bat activity over two nights along a railroad track. Likely, the bats were using the track to migrate south.

“So roads and tracks are travel and foraging habitat for bats,” said Moen. “This doesn’t mean we should build miles and miles of roads to help bats, but it shows another way that bats can benefit from human activities. We need to balance the needs of society with the benefits we receive from the natural world.”
Moen and Jessica Sieber, assistant professor of biology at UMD, are advising a graduate student on a DNA analysis of bat guano (fecal material). Using DNA barcoding, hundreds of species of insects eaten by Minnesota bats have been identified.

NRRI’s large bat research project in 2015 set out to identify roost tree habitat and understand the distribution of northern long-eared bats, partnering with the Minnesota DNR, and the Superior and Chippewa National Forests. They learned that these bat species are widely distributed across northern Minnesota. Their findings will help forest managers avoid important bat roost trees so the bats can successfully reproduce.

“We answered the questions in the first big research effort and summarized the results in about 400 pages of technical reports,” said Moen.

Moen is also researching where bats from the Soudan Mine could go for summer habitat to raise young. With the severe population decline, there will be far fewer bats to spread out across the Minnesota north woods.

The next steps in Moen’s bat research are to answer some new questions. Where else might bats be hibernating in the winter? How many bats are actually out there? Would they use bat houses in the summer instead of trees, if bat houses were made available? Bat houses were deployed last summer on the UMD campus and at NRRI to determine if bats would find and use them.

“Any good research project answers some questions and identifies new ones,” added Moen. “We likely will never know everything we need to about bats in Minnesota.”